When we decided to get chickens,  my husband watched videos and read articles about the different breeds.   He is very thorough in that way.  I am quite impetuous and depend a lot on past experience and instinct.  I have never been able to change that about myself.  I might tell myself to do some research but I am still driven to act much faster than is really conducive to proper analysis of whatever research I have actually attempted.

We had chickens when we lived in Sydney.  I don’t remember where Mum sourced them from.  To me they were just chooks (Australians often call adult chickens chooks – both roosters and hens are included in that nomenclature) and now, I don’t even remember if they were black or brown.  I’m only sure they weren’t white.   But I used to spend hours sitting in their yard with them just watching them.  They grew very used to me.  I can’t say I cuddled them (as a rule) but they were tame enough that they would wander into our house at times, or jump onto the table if we were eating lunch outside. 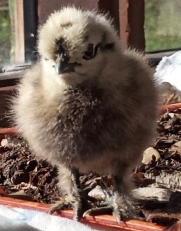 are a similar affection for them.  They usually get given names and favourites are established. We are sad (although not distraught) when one of them dies or gets taken by an eagle or whatever.

Our kids wanted pet chooks – creatures they could cuddle and croon over.  The Silkie breed seemed to match this description.  P was also attracted to Silkies because apparently they are likely to do less damage to gardens.  In terms of laying, they are not as productive as some other breeds so I was a bit torn.  I felt that if the kids spent enough time with them, any breed would be fun pets.  But the garden argument seemed definitive so we decided on Silkies.

Chooks are full of personality.  Their beady little eyes hold a lot of liveliness and the way they choof their heads along as they walk looks cheekily confident.  But they have a reputation for stupidity – perhaps the origin of the expression “bird brained”? P told me (laughingly) that one person online had described Silkies as particularly stupid – “dumb as stumps”.

And then, thanks to the oddities of COVID19 life, all the adult chooks were sold out and we ended up with day-olds.  Of course they are adorable.  They are so fluffy and soft.  They scrabble around, eating and poohing and drinking and cheeping and then, quite suddenly they all go quiet and, almost in unison, their eyes close and their little heads drop and they sleep where they are, standing up, beaks to the floor.  Only minutes later, one suddenly starts to life and they all wake up again, going on as if they had never stopped.  I feel so sad for their motherlessness as they sleep in those odd positions.  I want to provide them with a warm body and a sheltering wing.  Of course I can’t.

But stupidity is not a term I can honestly apply to these tiny morsels of life.  Having never met their mother or anybody who could teach them anything useful, they proceed fearlessly on with life.  They eat and drink.  They have learned to scratch (I 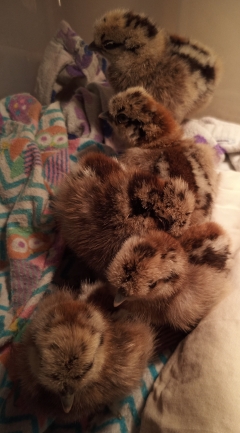 provide them with a tray of handpicked greens from the garden or mulchy dirt) and to dust-bathe.  And today when a magpie was eyeing them off through the living room windows, they cheeped their loud distress call, knowing that an enemy was at hand.  I know all the scientists in the room will tell me it’s instinct and instinct is not intelligence.  I know all that.  But it’s bloody useful.  And these chicks are far better equipped for life at 4 days old than I was at 15 years.

I might retract this in a few months time.  I might agree that they are stupid as jellybeans.  But right now, I am awed by their zest, their courage and their sheer audacity.  They are 4 day old geniuses!  That’s all there is to it.

We all walk in the dark. But if we hold hands, perhaps the dark won't be as scary. View all posts by abigfatcanofworms