If two months of lockdown due to pandemic and a week of unrest in the USA have proven anything at all, it’s that the stock market has nothing at all to do with reality.  The stock market has continued to boom, with the full support of the Federal Reserve.  It shows a supreme disconnect between the activities of the super wealthy and the realities on the street.  Big business is supported, nurtured, encouraged.  But the little people struggle on, mostly alone.

After listening to this morning’s episode of the The Signal, I see a similar dichotomy between reality and what happens online.  Listening to Donald Trump, you would expect evidence on the street of Antifa conducting organised crime and  premeditated violence.  But, according to people more interested in research than blame, ANTIFA doesn’t even achieve the status of  “an organisation”.  ANTIFA is a shortening of “anti-fascist”.   A man called Mark Bray wrote an “Anti-fascist Handbook”.  I haven’t read it and I don’t expect to order a copy, but if you look on Amazon you can read the back cover (well, I had to squint a bit). 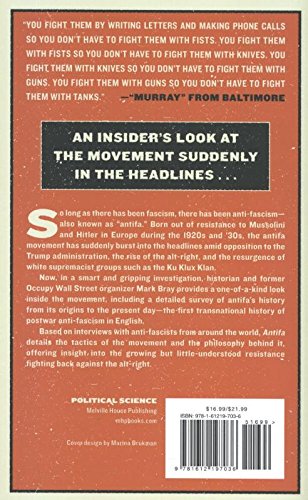 That quote by “Murray” from Baltimore, emblazoned at the top, to me is a desperate plea to avoid violence.  The aim is to do everything in the least violent way possible.  But if your opposition takes up arms, you will die if you persist with peaceful means.  That’s how I read it.  I don’t know about you.

ANTIFA is, according to Dr Kaz Ross from the University of Tasmania, a group of people in society who don’t like fascism… much like a group of people who enjoy bird-watching.  They have little else in common except that particular preference.  There is no president, there are no organised meetings.  The handbook is simply a suggestion for how individuals can attempt to fight fascism.  The movement has existed since the ’30s in response to Hitler and Mussolini.   Perhaps it is interesting to note that it re-emerges into public view now, in the USA.

Interestingly, the other extremist group at the far right of politics, are very active online but not so prevalent on the streets as you might think.  Dr Kaz Ross talks about their calls to arms,  talks about their spreading disinformation (for example by making fake ANTIFA accounts to provide a common enemy for their followers),  talks about their planning for “the big booglaoo” (aka “the big igloo”) when white supremacy will finally be established.   One twitter account calling for such activity, inciting such emotions, was discovered to have been managed by a 13 year old boy.

Supporters of ANTIFA apparently are encouraged to wear black and bandannas on their heads or hoods.  But wouldn’t looters at night commonly choose black in a ploy to be less visible and aren’t bandannas and hoods also used to avoid recognition?  Supporters of the far right apparently might be recognisable by camouflage gear, Hawaiian shirts and an igloo badge on their sleeves.    Look out for them both, next time you watch the news.

It seems to me that social media is a place of smoke and mirrors.  Big words and emotions made public.  But it’s more a wish than a reality… just like the stock market.

Invest in the dream and perhaps, if enough people do real work out there in the world, the reality will follow.

We all walk in the dark. But if we hold hands, perhaps the dark won't be as scary. View all posts by abigfatcanofworms